Thanks To Your Animal Companions

Helping Responsible Pet Owners to Deepen the Bond and Heal their pets, thus to Improve the Quality of Life for both the Animals and the Humans.

How can we help? 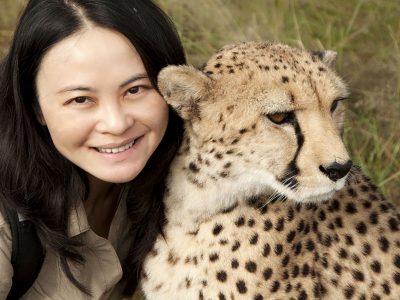 Yu Yu Saved the Life of my Cat!

I had my cat June since she was a kitten. She always had very good health. When she was 7 years old, suddenly, one day, she didn’t eat nor drink. I was quite surprised, I thought something was wrong with her food. The next day I went to get some new types of food for her, and fed her both the new food and her usual favorite food. She still didn’t touch it.

I was very worried. At the end of her third day without food or water, I took her to the vet. The vet did all kinds of checks – blood test, ultrasound, X-ray… etc, but he couldn’t find anything wrong. He gave her some vitamin. I spent thousands of dollars on the vet bill, and came home with June who still refused to eat and drink.

I was extremely worried and sad, seeing June getting emaciated day by day. The vitamin apparently didn’t help much. The vet told me I must start to force-feed June, or she’d die! So I went to get the syringe and cat food in paste form. A few times a day, I had to inject food and water by force into the mouth of June. She didn’t like it. She fought a lot. I struggled to get much food in her. She was suffering, and I was suffering too.

The situation lasted nearly 2 weeks, during which June refused to eat or drink anything apart from the small portion that I forcefully injected in her. June slept in her bed most of the time, visibly lethargic.

Desperately seeking help, I learned about Yu Yu from a friend. I had a talk with Yu Yu. She indicated that June had some emotional trauma and blockage, but we don’t know exactly what the reason was. Yu Yu suggested doing some healing for June.

At that time, I was barely opening up to the spiritual world. I wasn’t too sure if I really trusted healing. But in my desperation, I agreed to give it a try.

That same evening, I got a message from Yu Yu telling me that she just performed a healing session for June and asked me to keep her updated if there’s any improvement. Less than half an hour later, suddenly June stood up from her bed, and walked towards the food bowl and started eating!

I couldn’t believe my eyes! It was a miracle! June also drank some water before going back to her bed. The next morning when I got up, her food bowl was already empty! I added some new food for her, and she quickly ate it again.

From then on, June became totally normal again with her food and water, as if nothing had ever happened! Till this day, I still don’t understand what happened to her. But I am infinitely grateful for Yu Yu. She saved the life of my cat June! I couldn’t thank her enough! And of course I also became a firm believer and supporter of energy healing! — May, Hong Kong

Yu Yu is an experienced animal communicator (pet psychic) and healer. She has a natural-born bond and deep connections with the animal kingdom. She connects with your pets to understand their thoughts and solve issues. Yu Yu has helped hundreds of animal caretakers to better understand their animals, deepen the bond and trust with their animal companions, and improve the life quality of both the human and the animals.